The efforts of a pair of Halton Hills Hydro staffers during the aftermath of December’s ice storm has earned them the local Chamber of Commerce’s Employees of the Quarter award. 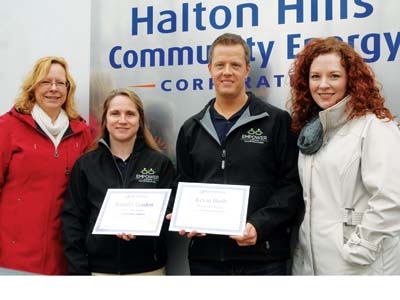 Halton Hills Hydro president & CEO Art Skidmore said that the widespread damage to thousands of trees and a large percentage of the 1,465 km of hydro lines in the municipality was an unprecedented situation for most of the staff members.

At the height of the storm, 100 per cent of the utility’s customers were without power, but many of those with handheld devices contacted HHH, hoping to find out when their electricity would be restored.

“We had embarked into social media about a year ago and we felt that it was really an important mechanism for communication so we had our Twitter and Facebook accounts active,” said Skidmore.

“We deal with outages and storms all the time, but we’ve never dealt with a storm of this magnitude. Throughout the storm we had thousands of tweets and Facebook conversations and updates to our website, so with those three mediums there were all kinds of opportunities for our customers to get information. The majority of feedback about how we kept the communications going was largely positive. We heard from our peers in the utility industry as well about how we did with social media, so kudos to Kevin and Jennifer, who did a fabulous job for us.”